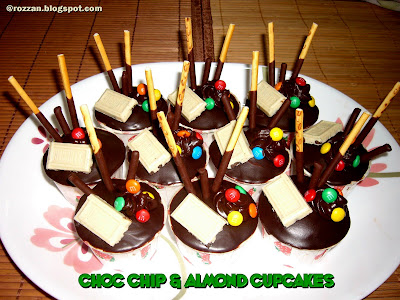 Baked these cupcakes last night and did some ganache topping on them this afternoon. Guess they're a little messy though. I, for once am not really into cupcakes frosting/icing. Probably becoz I think they're too sweet and that nobody at home will eat the end-product or probably I'm not good enough. However, I've done some cake icings before- way back in the 80s, the easy ones of course. Nowadays, everthing is so elaborate, beautiful and cute. So, just to share some pics and the recipe which I've obtained from Internet.

Divide the mixture into cupcake cases which have been placed into a baking tray. I use a large spoon. This makes about 12 cupcakes in large cases. I fill each case about /4 full. Pre heat the oven to 180C. Bake in the middle rack of the oven for 15 to 20 minutes. DO NOT OPEN THE OVEN for at least 15 minutes as the cakes will sink. They need to be firm to touch. Remove from the oven and cool. You can have a chocolate ganache on (half melted chocolate mixed with half fresh dairy cream(the thick type) and spread on the top of each cupcake and choc chips scattered on the top. 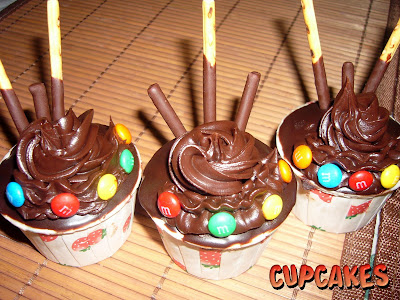 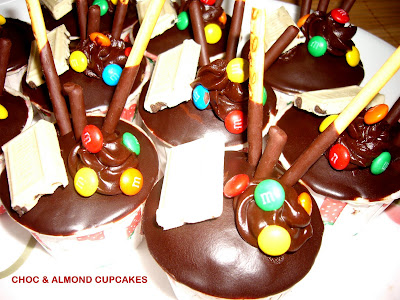 Bro, how's the taste like menurut citarasa bro le? Ok? Sedap? Tak sedap? Whatever it is, your cuppies look so yummy especially to all the chocolate lovers! I'm not that chocoholic though...

Hi ida. Thanks for sharing. Actually what I did is similar. I used cooking chocolate and whip cream + a little butter.