We had kue teow goreng for breakfast this morning. Actually brunch to be exact, as I cooked in between watching SURIA SEGAR. It was ready only abt 11am. Anyway, it's a simple dish which I'm sure most of us can do, ya! Just throw a little of this and a little of that & then taste! Not enough of some ingredients, just add. Too much of certain ingr, add others to counter, heheh! Finally when it is done, you can just sit down and eat. But not for me though. I don't normally eat after I cook as the aroma and smells while cooking will keep me 'full' till much later on. So, here's the pic. 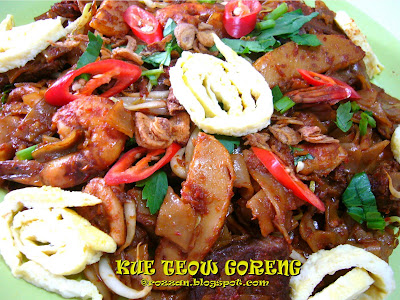 Method:
Heat oil in a wok. Put in the blended ingredients & saute till fragrant. Add in the beef, fish cake, squids & prawns. Stir fry for a while and then add in the bean sprouts. Keep stirring. Next, add in flat noodles, stir. Then add in all the 3 soy sauces, sesame oil & salt. Mix well and add in the chopped celery/spring onions. Place cooked kue teow in a plate and garnish with fried shallots, red chillies & sliced omelette. 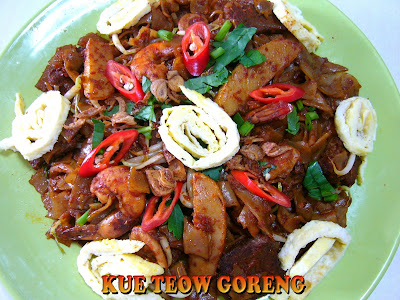